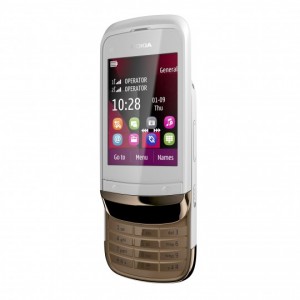 Nokia has unveiled its C2-03 model, a touch-and-type interface device combining a touchscreen and a keyboard, as part of its strategy to reach new users in emerging markets.

Mary McDowell, executive vice president in charge of low- end mobile phones, said the dual-SIM model will be “affordably priced” and feature maps and location-based services. McDowell, speaking at an event in Singapore, said the phone won’t require a data plan and that its location will be transmitted through wireless towers.

The handset has a slot on the side of the phone that allowws users to change SIMs without the need for a reboot. The phone can remember the settings of up to five different SIM cards.

The touch screen has 240×320 resolution and supports up to 65K colors. There is a 2 megapixel camera on the back of the phone and 10MB of built in memory, which can be expanded to 32GB via microSD card. The standby time of the phone is claimed to be 400 hours, while the talk time is 5 hours. There is a radio and a music player on board too.

Nokia C2-03 also comes with a new version of Nokia Maps preloaded, which also allows users to search for locations while offline. The latest Nokia Browser for Symbian Series 40 too is a part of the phone’s software.