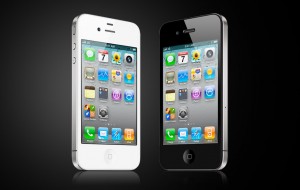 Apple Launched new Mobile iphone 4 in India. Apple iphone 4 is the word’s thinnest smartphone. It is the thinnest smart-phone just 9.3mm thin and 24% thinner than current iPhone 3GS. It has 3.5-inch sharpest, most vibrant, highest-resolution retina display. It comes with 5-megapixel camera with LED flash and HD video recording. Apple iphone 4 runs on latest iOS 4 OS and powered by Apple A4 processor.

People have been dreaming about video calling for decades. iPhone 4 makes it a reality. With just a tap you can wave hello to your kids, share a smile from across the globe or watch your best friend laugh at your stories — iPhone 4 to iPhone 4 over Wi-Fi. And it works straight out of the box. No other phone makes staying in touch this much fun.

iPhone 4 has two cameras: One on the front, which focuses on you. And one on the back, which focuses on everything else. FaceTime lets you switch back and forth between them at any time during a video call. All you have to do is tap a button.

The Retina display on iPhone 4 is the sharpest, most vibrant, highest-resolution phone screen ever, with four times the pixel count of previous iPhone models. In fact, the pixel density is so high that the human eye is unable to distinguish individual pixels. Which makes text amazingly crisp and images stunningly sharp.

iPhone 4 introduces a whole new way of multitasking. Now you can run your favourite third-party apps — and switch between them instantly — without slowing down the performance of the foreground app or draining the battery unnecessarily.1 This smarter approach to multitasking is available only on iPhone.

Shoot your own films in high definition. Capture impressive video even in low-light settings, thanks to the advanced backside illumination sensor and built-in LED light. Then edit and create your own mini-masterpiece right on iPhone 4 using the new iMovie app — with Apple-designed themes, titles and transitions. It’s now available on the App Store.